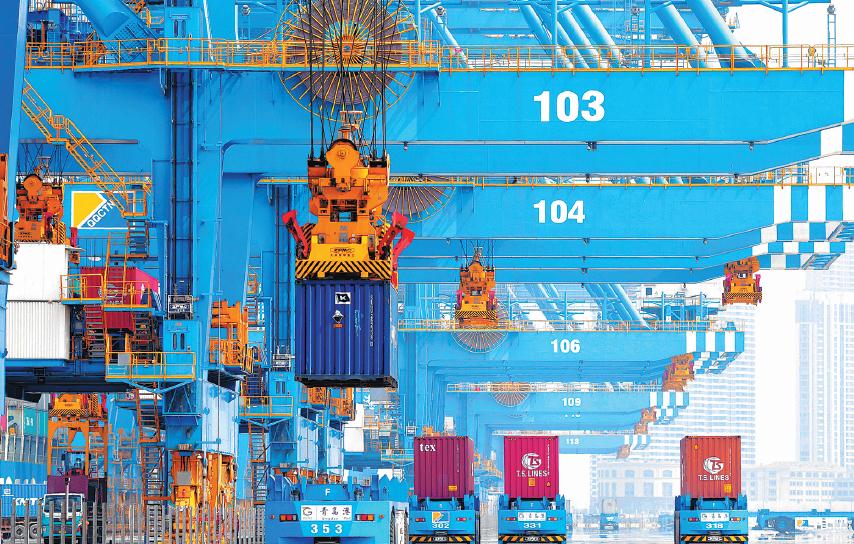 Chinese leaders have vowed to strengthen the country's economic opening-up drive, which is not in conflict with its recent emphasis on boosting domestic demand but will benefit the global economic recovery, analysts said.

China will continue to be committed to reform and opening-up and efforts in that respect will be strengthened, according to a decision made at a meeting of the Political Bureau of the Communist Party of China Central Committee on Thursday. Xi Jinping, general secretary of the CPC Central Committee, presided over the meeting.

The country's top leadership has on various occasions, including Thursday's meeting, reaffirmed the idea of a dual-cycle development pattern, meaning the country's growth will rely on both domestic and international economic developments, with the domestic cycle being the mainstay.

Such a focus on domestic demand is rational due to the serious fallout from the COVID-19 pandemic, which has dampened domestic economic activities and reduced international demand for Chinese products and services, analysts said.

"In the new era, the domestic cycle is the main link, supported by the international cycle, and as the advantage of China's super-large domestic market is brought out and its domestic economy is revitalized, there would be new impetus for the country's overall growth," said Liang Haiming, chairman of the Guangzhou-based China Silk Road iValley Research Institute.

The emphasis on domestic development does not mean China will withdraw from the international division of labor, nor does it mark its shift away from its opening-up orientation, said CITIC Securities in a research note.

"It does not mean China will close its door," said Zhu Jianfang, chief economist at CITIC Securities.

China will continue to open up its economy and be committed to ushering in more international companies to participate in the nation's high-quality development, contributing to the building of a new development pattern featuring both domestic and international cycles, said Liang, who is also dean of the Hainan University Belt and Road Research Institute.

"China's reform and opening-up will be further strengthened in the future and the country will explore higher-level and more liberal opening-up policies," he said.

Such policies would include the accelerated building of the free trade port in Hainan province, where a taxation management mechanism featuring low tariffs, low tax rates and simplified taxation procedures will be established to achieve the free flow of goods, personnel, capital and data, Liang said.

They would also include efforts to accelerate implementation of the Belt and Road Initiative, encourage the signing of regional comprehensive economic partnership agreements and bilateral free trade negotiations with some of its trade partners, and explore the management model for pre-establishment national treatment and a negative list, he said.

The financial sector would also be further opened to establish a highly accommodative, competition-based and inclusive system, Liang predicted.

This year will be one when China will further expand its opening-up drive, said Wei Jianguo, vice-chairman of the China Center for International Economic Exchanges.

"The negative list will be further shortened (to reduce areas forbidden for foreign investment) and China will release more reform and opening-up policies in the second half of this year," Wei told a recent forum.

China's commitment to opening-up has been felt by international companies.

"We see a series of favorable policies has been recently issued to support companies. … we still hold a positive outlook toward the Chinese market in the long run," he said.

Despite the recurrence of anti-globalization sentiment in some countries, China has maintained its commitment to opening-up after it successfully resumed work and production amid the many uncertainties posed by the COVID-19 pandemic.

"China is an important link in the global industry and supply chains and the world's second-largest economy. Its rebound will help enhance global economic recovery," said Liang from Hainan University.

Apple announced it will hold an online event next Tuesday, where the company is anticipated to introduce its latest hardware.The event will be broadcast on the company's website from Apple Park at 10 am Pacific Daylight Time in California, according to a statement from Apple, without providing furth

Cross-border use of RMB up

Last year, cross-border RMB settlement hit a record high of 19.67 trillion yuan, increasing 24.1% year-on-year, according to a report from China's central bank, the People's Bank of China (PBOC). More than 70 central banks and monetary authorities worldwide have incorporated the RMB into their forei

The China International Fair for Trade in Services (CIFTIS), a major platform for the services trade in the country, will be held on Sept 4-9 in Beijing.